Egg pasta is handmade daily and you can taste it. For the dressing they fillet a gallinella (fish) and roast in a pan with oil, garlic and white wine; then they add tomatoes and mint leaves, thickening it until the required consistency is reached. As for the wine, it depends on personal taste: a full-bodied white wine from Castelli or one of the other emerging areas, like Aprilia for example, but also a delicate red wine like a Cesanese del Piglio. 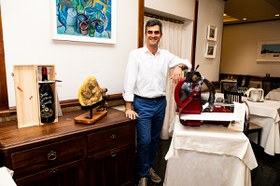 Near the Vatican, there’s a restaurant that was originally a popular tavern for the carriage drivers of the nearby Cola Rienzo square, but with the arrival of Dante Mililli in ’61, it took a new and totally different direction. A new name, Taberna de’ Gracchi, and carefully prepared cuisine, have transformed it into an elegant and lively gastronomic landmark with specialties in meat...